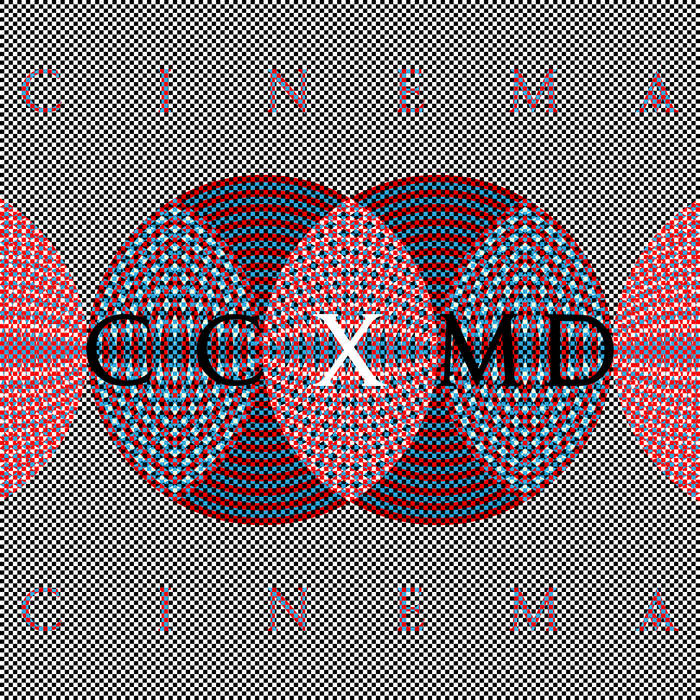 “…evokes Naked City, a lost and found coda from that Pharaoh Sanders collaboration with Sonic Youth – which doesn’t exist – and a teaspoon of DNA.” – Ink 19

“The opening sax and synth blasts from this wild EP can make you remember first hearing Pere Ubu’s debut album, or the noisy artists in Eno’s No New York project. The Brooklyn duo of Ev Gold and Paul Claro have previous releases under their belts, but added woodwind specialist Matt Darriau to create a free jazz and art-punk crazy sound, largely instrumental save for the occasional yelp or shout. We are lucky to live in a world where insane bands like CINEMA CINEMA exist.” – The Colorado Springs Independent

“Weird music for weird people. This is art punk’s finest taken to their furthest extreme. CINEMA CINEMA’s collaboration with Matt Darriau is wild — somehow free jazz, art punk, and Modern (that’s with a capital M, mind you) at the same time, CCXMD‘s wide, unbridled music is as intelligent as it is unintelligible.” – Jon Rosenthal / Invisible Oranges

“The new album CCXMD from the Brooklyn-area “art punk” group CINEMA CINEMA packs personalized glorious weirdness into sprawling, completely unpredictable songs. […] The way in which this group dials into fierce, even irresistible melodicism even while exploring the outer reaches of chaos makes their music super memorable. CCXMD tells a “story” of venturing out into the outer reaches of sound and the more directly “real-world” elements it expresses and not just finding but furiously grasping onto a core of empowering individuality.” – Captured Howls

“CCXMD sees the band further their horizons by recruiting Matt Darriau (The Klezmatics) for a jazz-infused, largely improvised session that edges into territory that Thurston Moore has long called home. The results are most assuredly not for mainstream consumption, but for those who like to experience music as a unique, artistic outpouring. […] Challenging and exciting, CCXMD is a bold step away from the norm and, for those curious as to the elastic limits of jazz, well worth checking out.” – SonicAbuse

“If Jethro Tull was a psychedelic jam band that listened to a massive amount of Wire, Soft Machine, and Chicago Art Ensemble […] What an aural journey this band takes the listener on. We feel the sense of anarchy staring down at us. The chaos can be liberating as much as it can warp the senses. Yet in this “entirely improvised” climate, the group are slaves to the machine and this recording either presents a snapshot of this specific moment of an artistic statement or ties them to a blueprint they have to take with them. How they reached this point is uncertain. But what I can conclude is that CCXMD is a momentous push forward for this group.” – Selective Memory

“…a sweeping release that is undoubtedly punk in spirit while also including doses of ambient and free jazz. If the New York City music scene has long been about marrying the raw aggression of frustrations of urban life with the heady, intellectual experiments of the avant-garde, CINEMA CINEMA prove themselves proud torchbearers on this latest sojourn.” – PopMatters

“CINEMA CINEMA are following their creative urges and aren’t dictated by any perception of fan demands or dictates: they do what they do because they’re driven to do it, and certainly not because of any label or trend. And this is why CINEMA CINEMA are such an essential band, and why they’ll endure. They don’t give a fuck about what you’re into. They do their own thing. And that is art.” – Aural Aggravation

“They manage to pull strange and otherworldly sounds out of both as they riff back and forth, with jazz-like drums adding power throughout and building up a feeling of tension and suspense. This is heady stuff that is meant to be digested with an open mind as the band explores sounds and the moods that they can create with them.” – Glide Magazine

“…a blend of noise, no wave and free-jazz, somewhere between early Boredoms, Captain Beefheart, and a primal scream therapy session. It’s anything but commercial…” – Treble

All songs written by Gold/Claro/Darriau
Engineered, mixed, and mastered by Vin Cin at Electric Plant Studios in Brooklyn NY
Artwork, design, and layout by Lauren A. Kelley (laurenakelley.com)
Special thanks to Matthew Charles Paneth

"Brooklyn post-punk goons Cinema Cinema have cojones as big as the deafening wall of eardrum busting noise that they cook up...Since 2008, Gold and Claro have slayed DIY style with their murderously loud, pedal-stomping anthemry."-VILLAGE VOICE

"If punk was truly meant to open possibilities, Cinema Cinema are a perfect example of just how far those explorations can go."
-THE BIG TAKEOVER ... more

Bandcamp Daily  your guide to the world of Bandcamp

Featuring Plunky of Oneness of Juju and Coldcut & the Keleketla! crew.